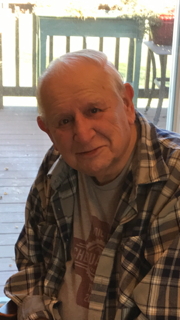 Donald was born on February 19, 1930 in Chicago, IL to the late Frank and Angeline (Leszczynski) Kimlicka. He attended Annunciation School and graduated from Holy Trinity High School.

He married Sylvia Czeropski on November 6, 1954 in Chicago. At the age of 16, Donald worked for Chicago Rawhide and left to join the Marine Corps, serving his country from 1951 to 1953, being discharged as a sergeant. Upon being discharged, Donald went back to work at Chicago Rawhide, retiring just short of his 50th year. He and Sylvia moved to Weston in 2007. He enjoyed gardening, fishing, casino trips, puzzle books and was a Chicago sports fan.

He was preceded in death by his wife, parents, and granddaughter Amy Sue.

It was Donald’s request that no services be held.

Memorials in Donald’s name may be directed to Mercy Ships by visiting www.mercyships.org

To order memorial trees or send flowers to the family in memory of Donald Kimlicka, Sr., please visit our flower store.