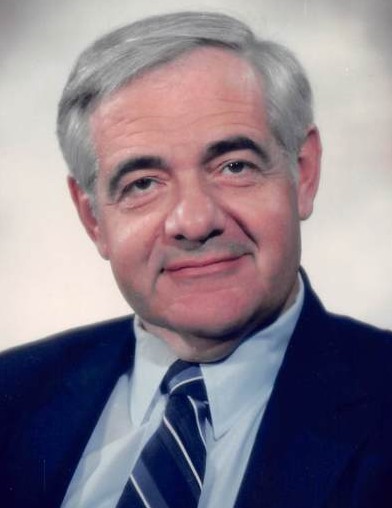 Peter was born September 27, 1935 in Ironwood, Michigan son of the late Peter and Mary DeSantis.  He was united in marriage to Patricia Lynn Kirby at Sacred Heart Catholic Church in Montreal, WI.  Peter graduated from Luther L. Wright High School in 1954 and attended Gogebic Community College where he obtained an Associate of Arts degree in 1956.  Peter always said it was the best educational experience he had.  He went on to Wisconsin State College in Superior where he obtained a Bachelor of Science degree in 1958 and majored in speech and history.  After being turned down for  teaching positions because of his disability and/or religious affiliation, Peter, Pat and daughter Jeanne went on to Michigan State University where he received a Master of Arts in Rehabilitation in 1960.  In addition Peter attended numerous advance studies in management, personnel, finance, service delivery system, prosthetics and orthotics.  Following graduation he was employed by the State of Ohio Bureau of Vocational Rehabilitation in Akron where he received several awards for his work in developing the first workshop in Kent.  Peter developed a rehabilitation program for hearing impaired at Kent State University and services to the state hospital for the mentally ill where he was named the first Rehabilitation Counselor of the Year.

From 1963-65 he was employed by the Adult Rehabilitation Center of the Curative Workshop in Milwaukee.  His main responsibility was to develop service systems and coordination of services with other organizations which involved working with the State Division of Vocational Rehabilitation, Milwaukee County Hospital System, and Marquette University Cardiac Rehabilitation Center.  From 1965-72 he was the Executive Director of Northern Valley Workshop and Day Care Center in Wausau.  First starting with no facility, Peter worked out of his car.  The Workshop developed over the years ended up in a new facility near Wausau Industrial Park.  With the help of Congressman Laird Peter obtained the first of many federal, state and private grants.  Peter was well known for his grantsmanship bringing in over $25million, and some are still coming in.

From 1972-1995 Peter was the CEO of North Central Health Care which was the first federally approved multi-county community mental health system which grew to be one of the most comprehensive delivery systems in the nation.  Peter attributed its success to the dedicated families and compassionate staff.

Peter was a member and Director of the National Rehabilitation, Counseling, American Personnel & Guidance, International Association of Rehabilitation Facilities, Chamber of Commerce, National Association of Community Mental Health Centers, WI Association of County Homes, International Association for Mental Health Services, Partnership for Housing, State of Wisconsin Supreme Court Committee on Needs of Elderly and Persons with Disabilities.  Peter was a lifelong member and past president of Wausau Noon Optimist and Italian Men’s Club of Wausau.  He served on the Governor’s Committee on Reorganization of Education Systems, Chair of the Governor’s Blue Ribbon Commission on Mental Health.  Peter was recipient of the Special Award for Dedicated Services in Rehabilitation, WI Counties Human Services Association, and was honored by Wisconsin Counties Association as a Friend of County Government.  He was honored to present a paper on deinstitutionalization at the International Conference at Trinity College in Dublin, Ireland.

Peter served on numerous county committees, City/County Data System, Transportation, and 21 years on the Capital Improvement Committee, as well as the Board of Community Care Central Wisconsin. Throughout his career and retirement, Peter was always available to assist with many people calling for advice.  He was well known for his political knowledge.

Peter is preceded in death by his loving wife Pat.  Peter met Pat while he was attending college and Pat attending St. Scholastica School of Nursing.  There was immediate attraction that continued to grow over their 59 years of marriage.  Throughout the years Pat not only raised their five children but was always there to support his work, including dealing with clients needing assistance in power outages.  They enjoyed many family trips, especially to Ireland and Italy where they made many personal friends.  Peter would always say, let’s go while we’re still young and healthy to enjoy life.  Peter and Pat always found the time to enjoy their children whether it was attending school events, playing, or traveling.  They even tried camping but Peter’s idea of roughing it was to check into a motel. Later on they were blessed with nine grandchildren and six great grandchildren.  They were all a joy whether it was telling stories, just talking, playing, trips, cooking, or helping with homework.

A Memorial Service will be held at 7:00 p.m. on Thursday, December 19, 2019 at Brainard Funeral Home – Everest Chapel, 5712 Memorial Court Weston, WI. Nancy Petulla will officiate. Visitation will be held from 3:00 p.m. until the time of service at the funeral home. Online condolences may be shared at www.brainardfuneral.com.

The family wishes to thank the staff from Aspirus for their special care.

To plant a beautiful memorial tree in memory of Peter DeSantis, please visit our Tree Store.

To order memorial trees or send flowers to the family in memory of Peter DeSantis, please visit our flower store.