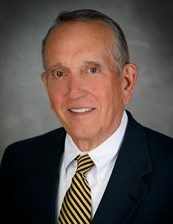 Gene was born on July 2, 1941 in New Brunswick, NJ, son of the late Bertis Eugene Davis Sr and Mary Virginia (Danner) Davis. While at Milton College, Gene played on the Basketball team and earned a Bachelor of Science degree in Business Administration. He also attended the University of Wisconsin School of Law and later acquired a Master’s Certificate in Project Management, from the University of Wisconsin Graduate School of Business.

After 5 years of courtship, he married the love of his life, Anita Brenda Mello, on October 15, 1966 in Chelmsford, MA. At the time he served as a Second Lieutenant, Signal Officer for a service and supply battalion in the United States Army Reserve and served until 1972.

From 1965-1975, he also worked in industrial engineering, sales and distribution at Wausau Paper. During his tenure, he assisted in the design and implementation of industry firsts in paper converting processes and was the first to open the Canadian market as a customer for Wausau Paper.

In 1975, Gene branched out as the Owner and President of CW Paper of Wisconsin, a passion for over 25 years and a company he built by acquiring five competitive business. Active in the industry, he also served as president of 3M National Distributor Council and President of National Paper Trade Association Foundation.

After retiring, Gene founded Davis Solutions, LLC, serving as President and Principal and specialized in Project Management. He then joined Newmark Grubb Pfefferle as a Commercial Real Estate Advisor in 2010, with a concentration in retail, industrial, office and land development, receiving top selling honors numerous times.

Gene had a wonderful passion for volunteering and was heavily involved in many organizations throughout the community including Northcentral Technical College, serving as an ordained ruling elder of First Presbyterian Church, founding board member and former President of the Boys and Girls Club, past President of the Chamber of Commerce, former President and Paul Harris Fellow Recipient of the Wausau Rotary Club and was also heavily involved with the Rotary International Youth Exchange Program. While serving as President of the Samoset Council Boy Scouts of America, he received the Silver Beaver Award.

As many remember, Gene always loved to have a good time and enjoyed many fun groups including the B&B, Spring Fever and the CW Paper Basketball team. Gene always enjoyed being out on the golf course, spending time with his Grandchildren, doing crazy tricks while water skiing and always looked forward to his annual fishing trip with his son, Gene.

A Celebration of his life will be held on Saturday, September 11, 2021 at 10:30 a.m. at First Presbyterian Church, 406 Grant St, Wausau, WI. Rev. Joy Nelson-Jeffers will officiate. Visitation will be in the parlor from 9:30 a.m. until the time of service.

The family would like to thank the caregivers of Aspirus and Mayo Clinics, as well as the kind people of the Wausau community for their support.

Brainard Funeral Home – Wausau Chapel is assisting the family with arrangements. You may leave messages and condolences for his family at brainardfuneral.com. In lieu of flowers, memorials may be directed to the Boys and Girls Club, First Presbyterian Church, the Samoset Council Boy Scouts of America, or the Salvation Army.

To order memorial trees or send flowers to the family in memory of B. Eugene Davis, please visit our flower store.