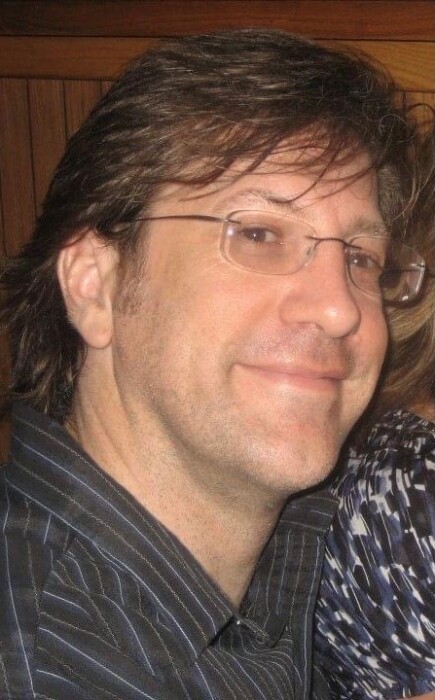 Brian E. Burrill, 53, passed away in Mesa, Arizona on November 27, 2021, after a brief illness. He was born January 11, 1968 in Durand, Wisconsin to Beverly A. Burrill (nee Elliott) and the late William B. Burrill. Shortly after graduating from D.C. Everest Senior High School in Schofield, Wisconsin in 1986, Brian moved to the Phoenix, Arizona area, and lived there for the rest of his life.  Like his father before him, music was an integral part of his life. He began at age 7 with piano lessons, and later saxophone in school bands, until he found his true passion in playing guitar while in his early teens. At age 17 he performed alongside his father in a local variety band, playing wedding gigs and other events for a few years. It was through those experiences that he developed a lifelong love of live performance. Brian’s interests and careers over the years were very diverse. He began his life in Phoenix at the Roberto-Venn School of Luthiery, to learn how to build his own guitars. He then found work as a telephone operator, before attending Bible College and becoming a music minister, traveling abroad on mission trips to Curacao and Thailand, and being an in-home caregiver. Later he attended Arizona State University and taught for 8 years at the Conservatory of Recording Arts and Sciences in Gilbert, Arizona. Following his career there, he found work driving a bread delivery truck, and working for a landscaping company. And of course, he also drew on his keyboard, vocal, and guitar skills while playing in many different bands throughout the years, in multiple genres including rock, pop, country, salsa, jazz, and others. He also worked with several theater organizations as a sound and lighting engineer, and taught music lessons privately. Another passion was for his dogs. He had several rescues over the course of his life, and was especially fond of Dodger, Dax, and Mina.  Brian was a complicated and yet earnest person, known and appreciated for his generosity, kindness, wisdom, and encouragement. He also had a firm independent streak, and didn’t like asking others for help, or burdening anyone with his problems. Instead, he aspired to be a ray of sunshine in the lives of those around him. He was extremely dedicated to his family and friends, many times dropping everything to assist others in their times of need. He was well known for his quick wit and humor; he boldly embraced the Burrill tradition of puns, groaners, and one-liners, carving out a legendary reputation all his own in this area.

He is survived by his mother: Beverly, his brother: Brad, Brad’s wife Teresa King, nephew: Gavin Burrill, and niece: Cassidy Burrill, all of La Crosse, Wisconsin, nephew: Julian (Kelsey) Burrill of Wausau, Wisconsin, along with numerous aunts, uncles, cousins, former students, bandmates, colleagues, and friends. His memory will live on in our hearts forever.

The family asks, in lieu of flowers, for memorial donations to be made to your local Humane Society.

Visitation will be from 12 noon to 2pm on Saturday, December 11, 2021 at the Brainard Funeral Chapel in Weston, Wisconsin, followed immediately by a short memorial service, with Michael Fisher officiating. Reception with meal to follow at Dale’s Weston Lanes.

His family would like to extend a special “Thank You” to Jason and Cindy Lopez, of Gilbert, Arizona for their care and support.

To order memorial trees or send flowers to the family in memory of Brian Burrill, please visit our flower store.