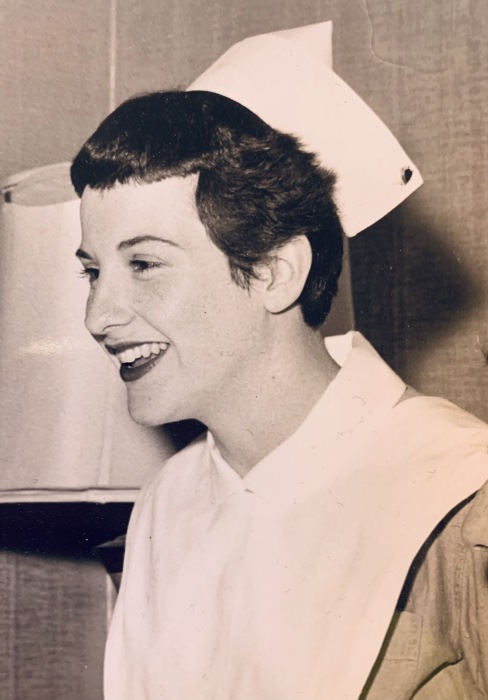 Carol J. Simon , 86, passed away on Friday, December 4, 2020 at Renaissance Assisted Living under the care of Aspirus Hospice.

Carol graduated from Swedish American Hospital School of Nursing in Rockford, IL on September 8, 1955 and was a nurse for 59 years. A photograph of her surrounded by fellow nursing students graces the walls of the Swedish American Hospital museum. She was incredibly proud of her nursing career, especially the last 15 years spent as a psychiatric nurse at Katherine Shaw Bethea Hospital in Dixon.

Carol charmed everyone she met. Some of her favorite things were elephants, stargazing, shopping, and rocks. Her favorite painting depicting a herd of elephants was prominently displayed to offer comfort to her during her final days. She did not hesitate to contact her family at 2 am to look at an active meteor shower. She loved to shop - having the ability to find an amazing bargain every time she ventured out. Later in life, Goodwill became one of her favorite haunts, visiting on a nearly daily basis searching for treasure, often successfully. Her beloved rock collection has residence in both Wisconsin and Illinois. Painting her fingernails with her extensive nail polish collection (often painting every nail a different color, hunting for the perfect shade) was a favorite pastime.

Carol is survived by her children, Marta (Dave) Humblet, Mark (Cyndi) Simon, and Matt (and girlfriend Julie Mott), and three grandchildren, Gabriella (Ella) Humblet, Marina (Mari) Humblet, and Kyra Simon. Also surviving is one sister, Mary Drew, as well as by her nieces and nephews.

In addition to her parents, Carol was preceded in death by her siblings, Charlene (Wakeley) Moore, Gerald Wakeley, and Roger Wakeley. She was also preceded by her nephews Scott and Randy Wakeley.

Due to the COVID 19 pandemic, Carol’s cremains will be interred at Oakwood Cemetery next to Lou in Dixon, IL, at a later date. At Carol’s request, the family will establish a Memorial to the Marathon County Humane Society in her name.

Carol battled heart failure for many years. She would have never achieved the longevity or quality of life that she enjoyed to nearly the end of her life, without the exceptional care given by Dr. Elvis Peter, Diane Joyce NP, the team at the Marshfield Clinic Heart Failure Program, Dr. Pablo Abrego, Dr. David Polomis, Heidi Heise NP and the entire Marshfield Clinic Wound Care Staff at Weston.

The family would like to thank the staff at Renaissance Assisted Living and Aspirus Hospice for the compassionate care that she was provided over the last days of her life. Marta would like to extend a heartfelt thank you to her co-workers at the VA Clinic in Wausau and a special thank you to her veteran patients that offered support and understanding over the last few months of Carol’s life.

From both Carol and Marta…Thank you Dave.

To order memorial trees or send flowers to the family in memory of Carol Simon, please visit our flower store.