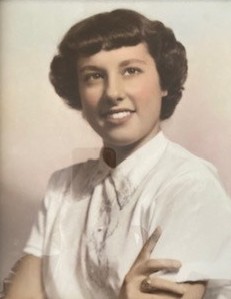 Carol was born January 6th, 1935, in Jeanette, PA, the daughter of the late Alexander Moore and Frances (Filocanio) Moore. She graduated with honors from Penn Township School in 1952.

Since a young girl riding on horseback alone throughout the hills of Westmoreland County. Carol was unconventional, headstrong, and well ahead of her time. In high school she led the first all-girl sit-in demonstration for curricular equity and the right to wear pants.

She met the love of her life while he was on leave passing through Jeannette, PA. She married Arthur G. Peterson of Calumet, MI and together they traveled throughout the United States, residing in places along the way such as Zion, Ohio; Seattle, Washington; Portland Oregon; Oakland, California; and finally, a rustic log cabin with no electricity in Bruce Crossing, Michigan. Carol and Art eventually settled into a country estate outside of Mosinee, WI to develop their own self-sustaining organic hobby farm. Arthur G. Peterson preceded her in death on January 8th, 1992, at the age of 56.

Carol volunteered and performed for the Central Wisconsin Children’s Theater as an actress and later a puppeteer. She brought this talent to the schools through the New Kid on the Block program, and often entertained her grandchildren through storytelling. She also performed with Children’s Theatre at the infamous Calumet Opera House in Calumet, Michigan.

In her late years, Carol settled back in Mosinee and took ministry with her church, St James Episcopal Church in Mosinee, WI. Carol was known as a prayer warrior. She lovingly supported other parishioners and her neighbors at the Maplewood Apartments in Mosinee through acts of charity, genuine kindness, and community outreach.

Carol’s life will be celebrated at 4:00 pm on Wednesday, December 15 at St. James Episcopal Church, 409 2nd Street Mosinee, WI 54455 with a visitation beginning at 3:00 pm. Amma Amanda will officiate. Carol will be buried with her husband, Arthur Peterson in the summer of 2022 at Lake View Cemetery, in Calumet, MI.

In lieu of flowers, please send a donation in Carol’s name to St James Episcopal Church for a memorial bench to be constructed at the church grounds for special outdoor occasions. Brainard Funeral Home is assisting the family with arrangements. You may leave messages and online condolences for her family at braindardfuneral.com.

To order memorial trees or send flowers to the family in memory of Carol D. Peterson, please visit our flower store.