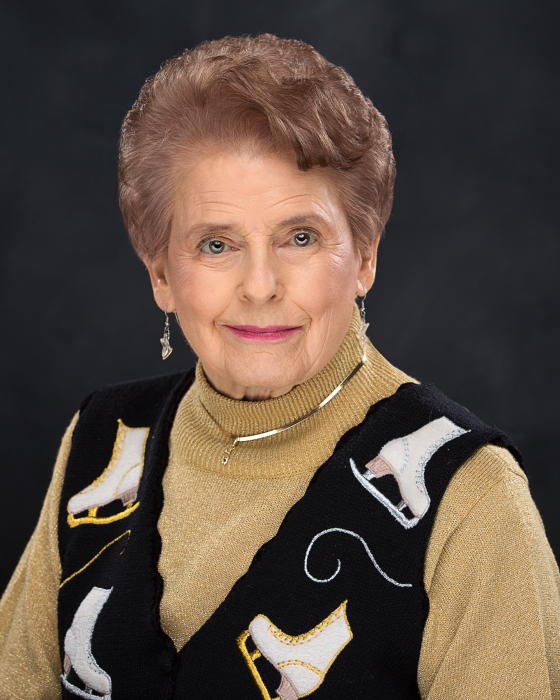 A new ice-skating rink has opened for Charlotte Tilden Hoecker (Char). Char passed away September 15, 2021. Charlotte was the second daughter of Ruth Grant Morgan Tilden and Laurence Stiness Tilden.  She was born in Providence RI on March 1, 1929 and resided there until the age of four when her family moved to Evanston Ill.

Char grew up in Evanston Ill, attending local public schools and graduating from Evanston Township High School, where she was known as Polly. While in high school she sang in various choral groups and participated in school sponsored variety shows. When Charlotte was four her father took her to Arrington Lagoon, in Evanston Illinois, to teach her how to ice skate. Thus, began her lifelong passion for figure skating.

After high school Charlotte worked in retail in Chicago and was a member of the Chicago Skating Club. Through a connection at the skating club Charlotte was introduced to the manager of the Ice Cycles skating show. Ice Cycles was a joint venture of the Ice Capades and Shipstad and Johnson Ice Follies. Charlotte was invited to skate in the show’s chorus for nine months as they traveled around North America.

Charlotte married Raymond (Ray) Hoecker and had four children. Charlotte and Ray’s family lived in Evanston, Illinois; Dallas, Texas; Crystal Lake, Illinois; Yarmouth, Maine and finally settled in Wausau WI in 1979. She began teaching skating in her back yard while living in Illinois. Eventually she approached the town of Crystal Lake about opening a skating rink on the lakefront. When Charlotte and Ray moved to Maine, she continued skating at the Riverside Ice Arena and at Bowdoin College’s ice rink. She began taking ice dancing and freestyle lessons in her forties. When relocating to Wisconsin, the primary criteria for Charlotte and Ray was a town with a rink, a golf course, ski hill, and nearby airport! Charlotte continued taking ice dancing lessons and passed her bronze and silver dance tests. Char taught skating for nearly thirty years in Wausau, both as a volunteer and as a professional and even made the local news because she continued to teach well into her 80’s.

Char loved to be busy and active in her community.  Charlotte was a lifelong singer, participating in many church choirs, including the St. John the Baptist's choir in Wausau. She performed with CenterStage Band and Show Choir, as well as the Wausau Pro Musica women’s chorus. She volunteered for thirty-five years with Mobile Meals, volunteered with Special Olympics of Wisconsin and was part of the Shine Auxiliary. Her accomplishments also include Girl Scout leader and Crystal Lake Jaycee Auxiliary where she was instrumental in developing a babysitter safety program. Charlotte liked to golf, ski, sew, cook (rum balls for gifts at the holidays!) and attend aerobics classes. She and Ray had annual Kentucky Derby parties with all the fixings including Mint Juleps.  Most of these activities she continued to do even in her 90’s.  Those who met her were often struck by her quirky humor, zest for life and her feisty spirit.

A memorial service will be held on Saturday, October 2 at St John the Baptist Episcopal Church, 330 McClelland St, Wausau, at 2:00 pm.  A visitation will be held from 12:00 pm to 1:00 pm.  Livestreaming will be available at www.brainardfuneral.com.

In lieu of flowers donations may be made to the Special Olympics of Wisconsin and St. John the Baptist Episcopal Church in Wausau.

To order memorial trees or send flowers to the family in memory of Charlotte Hoecker, please visit our flower store.