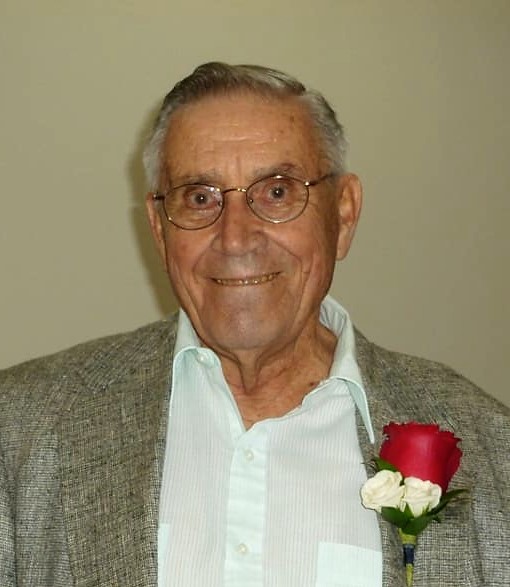 Daniel Anthony Gorski, 95, of Rothschild, passed away on Thursday, November 22, 2018 at Rennes Rehabilitation Center in Weston.

Dan was born on October 23, 1923 to the late Anton and Regina (Dobeck) Gorski. He married Verna Schave on August 24, 1946 and they raised three children and spent 69 amazing years together before her death in 2015.

Dan was born and raised in Rothschild and lived his entire life there. Until two weeks ago, he lived in the house he had built himself in 1956. He was a veteran of the Army, serving in France and Germany during World War II. Seeing the World War II Monument in Washington. D. C. as part of the Never Forgotten Honor Flight was one of his favorite experiences. He was elected to the Rothschild Village Board, serving as its President for several years. He worked at the paper mill in Rothschild for his entire career most of it in the Research Building. He loved to tinker and build and he was able to express that in his work, maintaining and repairing the facility he worked in and building prototypes of new products. He had a workshop in the basement of his home where he fixed T.V.s, sharpened the neighborhood children’s ice skates, built furniture for his children and wooden toys for grandchildren and once built a custom dog house for Bob Skowronski, a recently deceased Green Bay Packer.

His great-grandchildren were a source of great joy to him in his later years and loved his recognition and warm hugs. At his 90th birthday party he was asked what his dream was when he returned from World War II. He said his dream was to get a good job and raise a family. He was a good man who lived his dream.

Beside his parents and wife, Dan was preceded in death by a still-born infant, his sister Grace Aldrich and brother David Gorski.

The family would like to thank the staff at St. Clare’s Hospital, Rennes Center and Ascension Hospice for their care of their father and grandfather in the last two weeks of his life.

To order memorial trees or send flowers to the family in memory of Daniel Gorski, please visit our flower store.