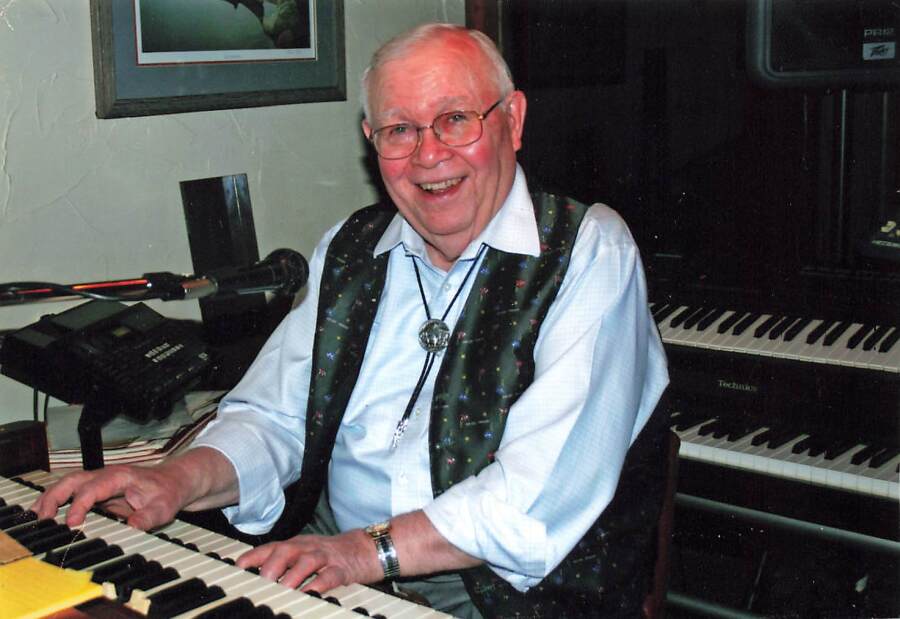 Darrel (Pete) Dwain Peterson, 93, passed away on April 29, 2021 at Aspirus Wausau Hospital under Hospice Care. He was born on December 2, 1927 in Gypsum, Kansas to the late Elof and Susie (Base) Peterson. He grew up on the family farm with his three brothers, Maynard, Cleo, and Frank. His father passed away when he was 12 years old.

On March 26, 1949 Darrel married Marlyn May Rennells in Green Bay, WI. Darrel was a World War 2 veteran and was honorably discharged in 1946. Music was a big part of his life teaching himself how to play piano at a young age. He played piano for the “4 Gentlemen” from Green Bay and after that played organ and piano at many supper clubs into his 80’s. Darrel was co-owner for 10 years if the Bliese and Peterson Toledo Scale Franchise. In 1967 they purchased Northern Waters Resort on Plum Lake and moved to Sayner, WI where they operated the resort for 7 years. Darrel then worked for Ahlborn Equipment for several years moving to Hayward to set up a Stihl chainsaw franchise until retirement in 2013. More recently living at Renaissance Assisted Living for seven years then Care Partners, memory care. In his younger years, he enjoyed snowmobiling, fishing, and boating on Plum Lake.

He was preceded in death by his parents, loving wife, Marlyn, and brothers, Maynard, Cleo, and Frank. A special thank you to Renaissance Assisted Living and Care Partners for the wonderful care he received while residing there. Also thank you to all the doctors, nurses, CNA’s and staff at Aspirus Wausau Hospital for the compassionate care he received.

Funeral Services will be at 11:00 a.m. on Friday, May 7th at Brainard Funeral Home, Everest Chapel, 5712 Memorial Court, Weston. Visitation will be at 10:00 a.m. till time of service at the funeral home. Burial will be at Maple Grove Cemetery, Town of Maine. Condolences may be given at www.brainardfuneral.com.

To order memorial trees or send flowers to the family in memory of Darrel Peterson, please visit our flower store.