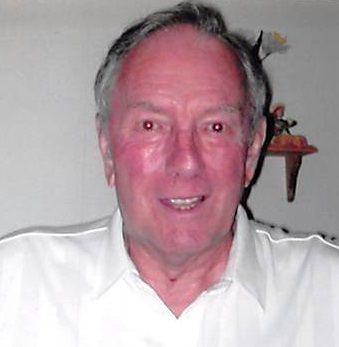 Dennis was born on June 18, 1930 in Rib Lake, Wisconsin to the late Peter and Mabel (Lehman) Wolf.  He graduated from Rib Lake High School and moved to Milwaukee where he worked for  Johnson Service Company doing air conditioning.  It is in Milwaukee where he met and married Ruth Kaphaem on April 12, 1949.  Dennis then joined the Navy where he was stationed on the USS Albany CA123 in Norfolk, Virginia.  He was discharged from the Navy early because Ruth was expecting their first child, however he did stay in the Navy Reserves for six years.  Together Dennis and Ruth would have four children.  After his discharge from the Navy, Dennis joined Ruth in Tomahawk where he went to work for the Tomahawk Dairy delivering milk for two years.  They moved to Wausau in January 1952 where he went to work for the Milwaukee Road as a laborer in the roundhouse.  In 1960 Dennis passed his Engineers Test and remained a rail engineer until his retirement in June of 1990.  After Ruth’s death in 1980, Dennis married Rose Riebe on August 26, 1981.  Dennis was an active member of Wesley United Methodist Church and enjoyed playing on their dartball and softball leagues for years.  He also was an avid reader and cribbage player and loved politics and sports.  After retirement, he took up golf.

Besides his parents, he is preceded in death by his sons Charles and Kimlin; brothers Elvis, Floyd, and Clifford Wolf; and his first wife Ruth Wolf.

Memorial Service will be held at 11:00 a.m. on Friday, July 24, 2020 at Brainard Funeral Home, 522 Adams St., Wausau.  The Rev. Ethan Larson will officiate.  Because we care about our family and friends, face masks and social distancing will be enforced.  Visitation will be held from 10:00 a.m. until the time of the services at the funeral home on Friday, July 24, 2020.

The family would like to thank the the entire staff at The Bay at Colonial Manor for their exceptional compassion and care.

To order memorial trees or send flowers to the family in memory of Dennis Wolf, please visit our flower store.