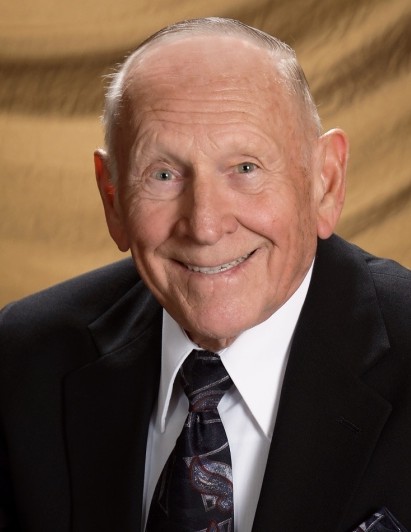 Donald Richard Pagenkopf fought the good fight and finished the race on Friday, November 8, 2019 surrounded by his loving family at Marshfield Medical Center. He was 83 years old.

Don was born in the Town of Stettin on July 19, 1936 to the late Earl and Berniece (Albrecht) Pagenkopf. He would meet the love of his life, Donna Mae Walters, in the third grade. They married on November 10, 1956 at St. Paul’s United Church of Christ, where they have been dedicated and faithful members since. He was a student at Wausau East High School and earned a bachelor’s degree in finance at Mt. Scenario College, Ladysmith. Don and Donna raised their children, Scott and Lisa, in Rib Mountain.

Don had an illustrious career in the Wisconsin Army National Guard. Enlisting in 1954, he served as the Communication & Electronics Officer, being promoted to Colonel in 1988. He received state and national military decorations and honors for his leadership and performance of duty. He was known for his technical competence, sound judgement, loyalty, keen mind, outstanding instruction, and positive energy. His advice and counsel were sought out by service members of all ranks. Don retired from service in 1993.

In addition to a successful career in the military, Donald was the owner and president of Northway Communications in Wausau. Starting in 1960, he would foster the highest level of confidence in his customers by conducting business in a professional and ethical manner. He was held in high regard by all his employees throughout his years of leadership with Northway. His legacy lives on through his children who now own and operate the business.

Don also served his local community by being a member of the American Legion, Wausau Elks Lodge, and a 35-year volunteer for the Wausau Emergency Police. He was also a Ham Radio Operator, supporting many local Ham Repeater clubs and their repeaters. He earned his pilot license and served many years as a Lt. Col. in the Civil Air Patrol as a member of the Rib Mountain Squadron as well as flying privately. Don also golfed in the Geritol League at Indianhead Golf Course. Special to him were the many lifelong friendships he and Donna made and cherished throughout the years.

Above all, the accomplishment Don was most proud of was his family. There was never a sporting event missed or dance recital left unattended. He could repair and fix anything he set his mind to. Whether taking family hunting or fishing trips to Canada, camping and spending time up north at the cottage, or taking the family on vacations to places familiar and new, Don was happiest when surrounded by those he loved. His best memories involved his grandchildren, of whose successful lives he took great pride in. His warm smile and generous heart will be missed by those who knew him. Simply put, he was an amazing man with an amazing life.

He is survived by his loving wife of 63 years, Donna, Kronenwetter; his son, Scott (Diana) Pagenkopf, Wausau, and their family, Christopher (Megan), Minneapolis, and Courtney, Milwaukee; his daughter, Lisa (Dr. Shawn) Sippl, Kronenwetter, and their family, Zachary, La Crosse, and Zoë, Madison; as well as many other extended relatives. He was preceded in death by his parents, and brothers Earl Jr. and LeRoy Pagenkopf.

A Funeral Service will be held at 11:00 a.m. on Saturday, November 16, 2019 at St. Paul’s United Church of Christ, 426 Washington St., Wausau. Rev. Dr. Philip Schneider will officiate. Visitation will be held on Friday, November 15, at Brainard Funeral Home – Everest Chapel, 5712 Memorial Court, Weston from 4:00 – 7:00 p.m., and again on Saturday from 9:00 a.m. until the time of service at the church. Interment will be held at Restlawn Memorial Park Garden of Eternal Rest where military honors will be performed by the American Legion Montgomery-Plant-Dudley Post 10. A memorial fund in Don’s honor will be established at a later date.

Don’s family would like to extend their gratitude to the staff of 8 North and Palliative Care staff at Marshfield Medical Center for their compassionate care of Don and the entire family.

To order memorial trees or send flowers to the family in memory of Donald Pagenkopf, please visit our flower store.