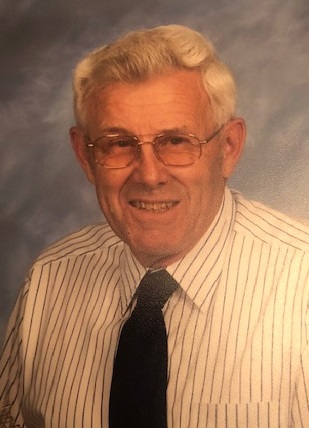 Florian was born July 20, 1935 in Rib Falls, son of the late Frederick and Mary (Reuter) Bradfish. He graduated from Wausau East High School in 1953.  In 1957, Florian enlisted in the Army Ready Reserve for 6 months Active Duty for Training and then 6 years reserves. He married Lana Juedes September 2, 1961 at St. Mark Catholic Church. He worked for France Sales and Service (during which time he attended many service schools) and Drott Manufacturing, which became JI Case. He retired from JI Case in 1992. He then worked for Ed Creske at Meritt Inn (Best Western) and Comfort Inn for ten years.

Florian was the “handy man for many.” He liked repairing lawn mowers, snow blowers, etc. Anything that needed fixing or repair, Florian took on with his self-taught abilities without hesitation any time of day or night. It wasn’t unusual to see him headed out at 10 pm to fix a furnace. Amongst everything that Florian was, he also helped in any way for anyone that he loved, even if that meant dressing up as Santa Claus for local families for the holiday season. Florian also had served faithfully as an usher at St. Mark Catholic Church and helped many years with the June Bug Fest.

Services will be Saturday, November 30th at Brainard Funeral Home- Everest Chapel, 5712 Memorial Court, Weston. Visitation will be from 9:00 am to 11:00 am with the funeral service at 11:00 am. The Rev. Allan Slowiak will officiate. Burial with Military Honors will be at Gate of Heaven Cemetery, Kronenwetter. Pallbearers will be Florian’s six grandsons and honorary pallbearers will be his three granddaughters.

In lieu of flowers, memorials can be made to the Alzheimer’s Disease Research, 22512 Gateway Center Drive, Clarksburg, MD 20871, or a charity of your choice.

To order memorial trees or send flowers to the family in memory of Florian Bradfish, please visit our flower store.