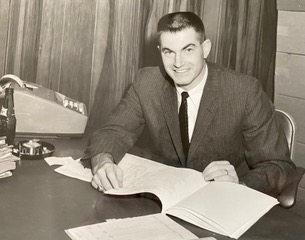 Gary grew up in Harper playing high school football and basketball, working summers at the local grain silo and in the hay fields, and getting into plenty of mischief involving hanging out of crop dusters, searching the principal’s office for his IQ score, and learning to avoid snake-infested fishing holes. A Harper High School teacher helped him attend college by giving him enough money to pay for his first-year tuition. Gary never forgot her kindness and quietly helped others the same way throughout his life.

In college, Gary met Jo Carrol Beeler and realized he believed in love at first sight. They married six months later. Throughout their 60-year marriage, he brought her flowers and told her she was beautiful. Jo left college to work full-time so Gary could complete his degree and become a Certified Public Accountant. He began his career in a public accounting firm in Wichita, Kan. and later joined Wausau Insurance Company as a field auditor in Kansas City, Kan. His career with the company took the family from Kansas to Missouri and eventually to Wisconsin. Gary retired as vice president of Internal Audit, a role he loved because it aligned with his commitment to integrity and love of a good challenge.

Gary was a proud father and delighted grandfather who never hesitated to tell the kids and grandkids how proud he was and catch them in breathtakingly tight hugs because he loved them beyond words. They will remember him as a wonderful storyteller, a devoted joke-teller, and a passionate learner who often responded to questions with, “I don’t know. Let’s go look it up!”

Rest in peace. You will be missed.

The family would like to thank the care providers at Wellington Place in Rib Mountain for their kind and patient care.

Memorial and burial will take place in late August. In lieu of flowers, the family is accepting donations for a scholarship fund to benefit a Harper high school student.

To order memorial trees or send flowers to the family in memory of Gary Thomas, please visit our flower store.