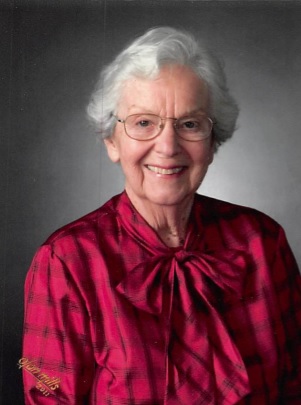 Grace L. (Gribble) Wylie, 93 of Wausau, passed away at the Mount View Care Center Evergreen unit on Wednesday, September 19, 2018, with her family and husband of 74 years at her side.

Grace was born on September 11, 1925 at Ironwood, Michigan, daughter of William C. and Maud L. (Slade) Gribble.  She was the youngest of three children.  She was a 1943 graduate of the Luther L. Wright High School, during which time she met her future husband, Robert C. Wylie.  They were married January 31, 1944 during his time in the military service and began their residence in Wausau in September 1947, where they raised three children.

Grace was a homemaker, and also found time to use her artistic and creative talents in the community.  From an early age she excelled in drawing and painting.  She was an early member of the Wisconsin Valley Art Association and displayed her paintings at the initial Wausau Arts Festival and in many successive years plus other juried shows in Wisconsin.  She taught art classes at the YWCA.  She used her talents to design and sew costumes for several musicals performed by the Wausau Community Theatre group and for special Halloween costumes for her three local grandsons.  Delivering meals weekly to shut-ins for the Wausau Mobile Meals program, which she did for over 35 years, was her favorite volunteer activity.

Singing was a delightful activity for her and she sang in Methodist church choirs for 68 consecutive years, beginning while in high school.  She was an original member of the Wausau Pro Musica chorus and participated in several community choruses, especially those performing the Messiah composition.  Gardening was a favorite activity and she once won the YWCA Garden of the Month award.  She was proud of her English heritage and visited England three times to the birthplaces of her four grandparents.  Probably her greatest outdoor adventure was an eight-day horseback trip in the Bob Marshall Wilderness in Montana.  Her favorite getaway with her husband was on the island of St. John in the Virgin Islands where they made twenty vacation trips.

Grace was preceded in death by her parents and brothers, William and Russell.

Funeral Service will be at 11:00 AM, Tuesday, September 25, 2018 at First United Methodist Church, 903 Third St, Wausau.  Visitation will be from 9:30 AM until the time of services, at the church.  Reverends Jayneann McIntosh and Donald Gribble will officiate.  Burial will take place at 11:00 AM on Wednesday, September 26 at Riverside Cemetery in Ironwood, Michigan.

The family is especially appreciative and grateful for the compassionate care for Grace at the Mount View Care Center and the guidance of the Aspirus Palliative Care and Hospice Care units.  Memorials may be sent to any of those or the church, in Grace’s name.  Brainard Funeral Home is assisting the family with arrangements.

To order memorial trees or send flowers to the family in memory of Grace Wylie, please visit our flower store.