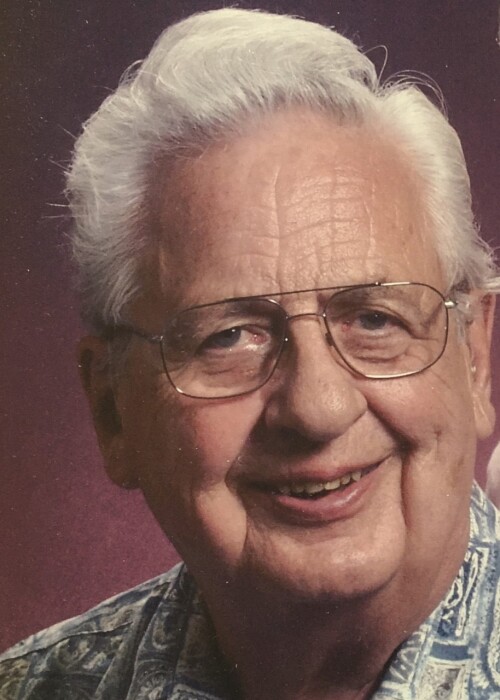 On 10/28/2020 at the age of 98 years old, Harold James Bye was called Home to Eternal Life into the arms of Jesus Christ his Savior.

Harold was born to Charles O. and Doris (Knox) Bye at Sault Ste. Marie, Michigan on 10/20/1922. His father’s employment for Standard Oil resulted in frequent moves, including Gladstone, MI and Menominee, MI. Eventually they moved to Wausau, WI where he graduated from Wausau High.

Harold was employed by the Wausau Iron Works before he enlisted in the United States Army Air Force in September of 1943.

He was called to active duty for WWII on March 1943 for pilot training. He completed training at Lubbock, Texas as a 2nd Lieutenant on 1/7/1944. He was then assigned to Dodge City, Kansas for combat training in a Martin B26 Maurader bomber. Harold was a member of the 322nd bomb group the “Annihilators” and flew combat missions in England and France. His plane was the “Flak Bait”. He was awarded the Air Medal with Oak Leaf Cluster and a Silver Cluster which represented 35 combat missions. He eventually completed 37 missions but during this time was shot down over Belgium during the Battle of the Bulge. He returned after being shot down to active duty as a Flight Leader and was honorably discharged as Captain.

Harold found employment at the Wausau Garage after returning home from the war and married his high school sweetheart Elizabeth Tewes on 6/15/1946 .He joined St. Paul’s UCC congregation shortly thereafter. Harold and Elizabeth first met and immediately fell in life-long love in the Wausau High School library when Harold was a senior and Elizabeth was a sophomore. Their example of love and devotion through a World War and for 66 years of marriage was precious indeed.

Harold also worked at Marmet Corporation from 1952-1988, working his way up through the company and retiring as President.

Harold was a mentor for everyone he met on Life’s journey. He could be tough and stern and willing to call anyone’s bluff if need be. He expected honesty and the best efforts from everyone no matter the situation thus inspiring and motivating all. He was a wonderful story teller and had a life long sense of humor. Hobbies included woodworking, spending time and fishing with his family at his summer home on Mid Lake. He was devoted and loved his family, his dogs and especially loved fresh panfish fish fries at Bob and Mary’s house.

He was preceded in death by his parents, brother David, wife Elizabeth and daughter Susan. He is survived by his daughter Mary and son in law Robert Kersten, niece Linda Cannon of Wausau, nephew Richard Bye of Stevens Point and great nephews.

Friends may call at St. Paul’s United Church of Christ from 9-11 AM on Thursday 11/5/2020 . A celebration of Harold’s life will follow at 11 AM at St. Paul’s UCC. Military honors will be held at Restlawn Mausoleum following the church service. Social distancing will be observed.

The family would like to acknowledge the loving care Harold received from the ENTIRE staff at Rennes Health and Rehab in Weston as well as Aspirus Hospice.

Harold was deeply loved and will be greatly missed.

To order memorial trees or send flowers to the family in memory of Harold Bye, please visit our flower store.