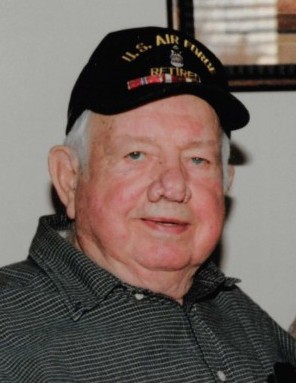 James “Chief” Garske passed away Saturday, March 14, surrounded by his loving family at the age of 90.

Jim was the first son of James Garske and Catherine Knaack. He was born February 20, 1930, in Wausau. Jim joined the U.S. Air Force in 1947 and was stationed at Travis AFB in California. Jim married Carol Urmanski while home on furlough in Wausau on June 25,1952.  The couple returned to California where they made their first home in the city of Napa. They lived in California for 16 years and had four children.

Jim had more than a 27-year career with the Air Force and retired at the rank of Chief Master Sargent with the title of Flight Line and Maintenance Superintendent of the 36th Tactical Fighter Wing in Bitburg, Germany. He was very proud of his military service and had many fond stories he would share. Chief Garske participated in the Never Forgotten Honor Flight on October 21, 2013 which was a very moving experience for him. Jim Graduated from the Air Force Noncommissioned Officers Academy in 1962 and was awarded the Bronze Star Medal, Meritorious Service Medal with 1st oak leaf cluster and the Air Force Commendation Medal during his service career. After retiring from the Air Force Jim Graduated from North Central Technical College with a A.S. Degree in data processing. He had his second career at Greenheck Fan in Schofield and retired there after 10 years.

Jim loved traveling to almost every state with Carol, as well as trips all over Europe. He enjoyed fishing and hunting with his family and friends as well as gardening, wood crafts, stained glass, and wine making. He loved spending time up north at the same RV park for over 30 years. Boating was a favorite pastime as well as enjoying nature.

A Memorial Service for Jim will be held at Brainard Funeral Home - Everest Chapel at a later date. Online condolences may be shared at www.brainardfuneral.com. In lieu of flowers, memorial donations may be made to the Humane Society of Marathon County.

The family wishes to extend their gratitude to the all the staff at Aspirus Wausau Hospital who cared for Jim.

To order memorial trees or send flowers to the family in memory of James Garske, please visit our flower store.