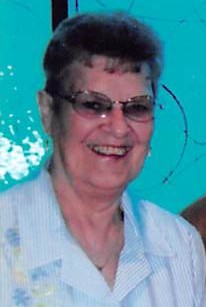 Janet was born on June 10, 1930 in the Town of Maine to the late Otto and Alma (Radtke) Imm.  She married James Burns on November 8, 1954 in Waukegan, Illinois.  Together they had 6 wonderful children.

Growing up with immigrant parents and working on the farm, Janet learned what hard work was from a young age.  She was employed as a bartender at the VFW but also worked hard at raising her family as well as being a caretaker to several aging family members.  Janet had a witty sense of humor and would often joke about playing the “old lady card.”  She enjoyed the slot machines at the NorthStar Casino and always looked forward to her and James’ twice-yearly trips to Las Vegas.  She will be remembered as a wonderful woman of God who loved her family unconditionally.

Janet was joined in heaven by her husband, James; son Thomas; and her late brothers and sister.

Memorial Service will be held at 7:00 p.m. on Friday, October 9, 2020 at Trinity Lutheran Church, 501 Stewart Ave., Wausau.  The Rev. Timothy Smith will officiate.  Visitation will take place from 5:00 p.m. until the time of the service at the church on Friday.

Brainard Funeral Home is assisting the family.  Online condolences may be given at www.brainardfuneral.com

In lieu of flowers, memorials may be directed to Trinity Lutheran Church, 501 Stewart Ave., Wausau, WI 54401.

The family would like to thank Janet’s former neighbors, Dan and Theresa Mills, for their love and care of Janet.  An immense thank you to all of the caring doctors, nurses and attendant staff, all of whom risk so much, especially Hannah and our angelic nurse, Sheila Oestreich.

To order memorial trees or send flowers to the family in memory of Janet Burns, please visit our flower store.