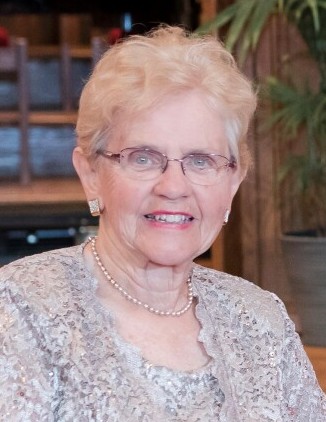 Jeanette “Jan” Zagzebski, 84, of Schofield, peacefully passed away with her family by her side Friday morning July 30, 2021.

Jeanette was born February 1, 1937 to Ruth and Leonard Hamele of Portage, Wisconsin.  While growing up on the family farm, Jan was responsible for daily chores as well as babysitting her troublesome younger brothers.  Her chores included cooking and cleaning the farmhouse, but her favorite activity was getting on her pony to herd the cows back to the barn at the end of day.   Jan attended a country grade school and then after graduating from Portage High School, she went on to college in Stevens Point to pursue a nursing career.  Her plans were altered when God introduced Jan to her beloved husband of 61 years, Edwin, as he was recovering from minor surgery in the same hospital in which she worked as a nursing student.  Jeanette made Edwin’s day when she offered her new patient a backrub, thereby setting into motion a lifetime of tender demonstrations of love for one another.  They were wed in St. Stanislaus Catholic Church in Stevens Point on June 14, 1958, and have inspired family and friends by their love of and dedication to each other throughout their marriage.

Jan and Ed began their married life together in Marshfield, WI, where their genuine care for others and enjoyment of life helped them establish many lifelong friendships.  One special friendship from the time they were married was with Jack and Joann Hackman.  Both couples enjoyed the St. Louis Cardinals/Chicago Cubs baseball rivalry and their trips to Wrigley Field became a highlight for them all.  While Edwin started his professional career, Jeanette and Joanne were behind the scenes helping to bring in a little extra money with handmade crafts and selling laminated newspaper clippings.  The focus quickly shifted to family as Ed and Jan were blessed with the arrival of twins shortly after celebrating their first wedding anniversary.

Jeanette was widely admired for her sassy sense of humor, her fabulous cooking, and her outreach to others.  She was spunky and knew how to have fun—demonstrated by her planning of mock weddings, red hat parties, and practical jokes she loved to play on Ed.  Jan was a creative cook always looking to please family and friends.  If you ever came over for a meal at the house, you better expect to have an extra helping of everything she had cooked.  Jan’s cooking legacy will continue through the generations as her recipes are now the family favorites for grandkids and friends alike.  And yes, she could be persistent and a wisecracker– traits that might have been handed down to her five kids.

Jeanette and Ed dedicated much of their time to family activities—seldom missing any event or occasion to get together.  Being married to Ed, Jeanette learned to love sports, and passionately attended thousands of games that her kids and grandkids participated in.  She was open to traveling almost anywhere, especially when her children, grandchildren, or friends were involved.  One lifelong memory was made in 1985, when she and Ed traveled to Rome and were granted a private audience with Saint Pope John Paul II.  Jan was widely known and admired for her selfless service to others.  She volunteered at assisted living homes for over 40 years.  She loved helping with Bingo, visiting with people so they wouldn’t be lonely, and bringing meals to elderly people who were homebound.  Jeanette participated in several international mission trips and spent many hours volunteering at St. Agnes Catholic Church.  Simply put, Jeanette was a loving wife, dedicated mother, and loyal friend.  She epitomized Saint Teresa of Calcutta’s admonition to do “small things with great love.”

Jeanette is survived by her five children—Connie (Ken) Zebro of Wausau; Ken (Mary) Zagzebski of Indianapolis, IN; Dan (Dana) Zagzebski of Cleveland, OH; Steve (Kary) Zagzebski of Tarpon Springs, FL; Pam Zagzebski of Coon Rapids, MN—15 grandchildren, and 9 great grandchildren.  She is also survived by her brothers Kenneth and Lawrence Hamele, her sister Joyce Sheets, her sister-in-law Jean (William) Hamele and brother-in-law Robert Miller.  Jeanette was preceded in death by beloved husband, Edwin, her granddaughters—Julia Zagzebski and Amanda Zebro—her parents, her brothers William, Robert and Warren Hamele, sister June Miller, and many of her close friends and relatives.

Thank you to the many friends and family that visited Jan over the past two years.  Your love and friendship meant a great deal to her and her family.

To order memorial trees or send flowers to the family in memory of Jeanette "Jan" Zagzebski, please visit our flower store.