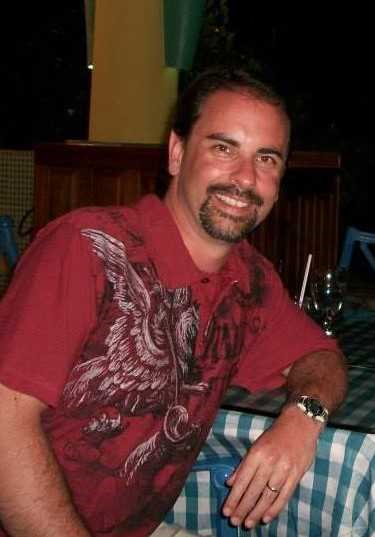 Jeremy J. Rieman, 47, passed away peacefully early on Tuesday morning of June 25, 2019, with a loving family at their home in Mosinee, WI.

Jeremy was a very shy, but kind person. He would always jump in to help whenever he saw someone struggling. He loved to be with his family, whether that would be out in the boat, or staying in watching shows and movies. Jeremy was also very caring and compassionate to animals, as it showed with every animal he came in contact with.

While living in Wausau, Jeremy worked at Fiskars for an impressive 13 years. Day in and day out, Jeremy would take his cooler filled with his favorite homemade lunches and work his hands to the bone, to help provide for the family which he loved with all his heart. Many of his coworkers said if it weren’t for him, the place would just not be the same.

Jeremy was a loving father, as well as husband. He had a passion for bowling, starting at a young age and dominated in leagues. Jeremy was also an avid fisherman, whether it would be reeling in the little ones, to fighting the giants. Just as long as there was a fishing rod in his hands, and a line in the water.  From a young age, Jeremy took to wood working with his grandpa, which taught him the value of seeing things through, which he avidly passed on to his children.

It is hard to explain just how much of an impact Jeremy had on everyone. He always was trying to help in the slightest way possible, and by doing so, he spread joy amongst many. He will be deeply missed by many, from friends to family, It is not necessarily goodbye, but more like until we meet again.

Survivors include; his wife Tracy Rieman; stepson, Cody Jay; son, David Rieman; daughter, Calacey Rieman all of  Mosinee; and his aunt, Ginger Quaderer, Wausau. His pets include Spunky (rabbit), Moscato and Penny (cats), and Hollie (dog).  Jeremy was preceded in death by; his mother, Georgia Rieman; grandparents, Charles and Georgette Rieman; and his uncle David Quaderer.

To order memorial trees or send flowers to the family in memory of Jeremy Rieman, please visit our flower store.