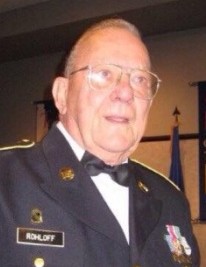 Jerry graduated from Wausau High in 1950 and began working on small engines at Zander’s Mobil in Schofield. He joined the U.S. Army National Guard, retiring as a Sgt. Major after having served honorably for 42 years; most notably serving with the 32nd Red Arrow Division during the Berlin Crisis. Jerry’s name is etched into the Wisconsin Army National Guard Hall of Honor in Madison. Jerry and Jane served with local, state, and national chapters for organizations like Ducks Unlimited and the Wisconsin National Guard Enlisted Association where they traveled across the country attending conferences into their retirement.

Unlike his wife, Jerry was a simple and meek soul. A dedicated worker and humble person, Jerry was liked by everyone he met. He was very active in raising his children, sharing his love of the outdoors by taking them hunting and fishing up north almost every weekend they could. The Rohloff family would always celebrate Jerry and Jane’s anniversary at their cottage and will continue to do so. Some of Jerry’s interests included teaching Hunter’s Safety, spending time with his grandchildren, and was an avid bowler.

A Memorial Service will be held Thursday, August 30, 2018 at 7:00 p.m. at Brainard Funeral Home – Everest Chapel, 5712 Memorial Court, Weston. Visitation will be held from 5:30 until the time of service at the Funeral Home. The American Legion Montgomery-Plant-Dudley Post 10, Wausau, will perform Military Honors following the service. In lieu of flowers, memorial donations may be given to the Never Forgotten Honor Flight or the Man of Honor Society of Marathon County.

We would like to thank the staff at The Renaissance for giving our Dad the loving care and wonderful environment to live for his short stay; along with the Doctors and Nurses at Aspirus Hospital for a peaceful place for Dad’s final days on his journey home to be with the love of his life, Mom. May God bless you all for the work you do every day.

To order memorial trees or send flowers to the family in memory of Jerry Rohloff, please visit our flower store.