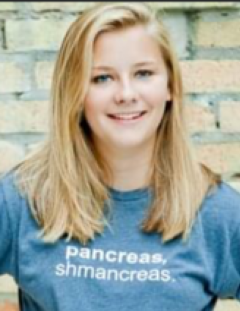 On August 15, 2020, Jessica Elizabeth Drexler, 26 years old, passed away cradled in the loving arms of her Mother due to complications of diabetes and depression. She was the beloved daughter of Kevin and Kathryn (Basiliere) Drexler, sister of Jordan (Ashley) and a loving Aunt to Penny.

Jessica was born on June 10, 1994, and was a long-awaited blessed gift to her parents. She was an athletic child and loved to play basketball as nothing was better than a 3 pointer. Even as a 5 year old she took a permanent magic marker and wrote Shaq on her new tennis shoes-she was quite a dreamer. Her love of the outdoors continued throughout her life as she played golf with her Dad, kayaked with her brother and best friend, and skate boarded on beautiful days.

When Jessica was 6 years old, she was diagnosed with Type 1 diabetes which started a life of struggle and challenges only known by other families of diabetic children. She fought relentlessly a disease that continued to inflict complications, pain and hardship. She actively participated in the JDRF walk to cure diabetes and was surrounded by family and friends walking on Jess’s team. For many years she was able to share her experiences by attending the Chris Dudley Diabetes Basketball camp first as a camper then as a camp counselor-it was some of the happiest times of her life.

Jess graduated from Oshkosh North High School and St. Norberts College with a degree in English and Creative writing. Jess loved poetry especially Edgar Allen Poe and published her own poems. Her poetry was later expressed through her musical talent as she wrote songs.  She taught herself the guitar, had an amazing gift with words and a beautiful smooth voice. She often said her two favorite things were her guitar and Penny, her little niece.

Jess was preceded in death by her grandmothers, Jessie Basiliere and Betty Drexler, grandfather, Frank Drexler, and cousin Shana Beck-Stinski.

Jess, we will hold you in our hearts and cherish the beautiful memory of you forever.  Your pain and sorrow is no more.  Now you can fly with the other angels.

To honor her memory please spread Jess’s message.  In her own words:

It’s easy to be a kind person.

It’s easy to be polite.

It’s easy to be considerate.

It’s easy to treat others with respect.

It easier to sleep at night knowing you are doing what you can to make the world a better place.

It’s difficult to hate, judge, and hold grudges. It takes so much energy to fight, argue, and be violent.

Find it in your heart to love. The world needs it now.

A Vigil will be held at 6:00 p.m. on Friday, August 21, 2020 at St. Raphael the Archangel Catholic Church, 830 S. Westhaven Drive, Oshkosh, WI 54904. Visitation will be held from 4:00-6:00 p.m. until the time of service at the church. Because we care about family and friends, face masks are encouraged and social distancing will be observed. In lieu of flowers, a memorial has been established in Jessica Drexler’s name. Memorials may be sent to The Drexler Family c/o Brainard Funeral Home, 522 Adams Street, Wausau, WI 54403. Condolences may be expressed at www.brainardfuneral.com.

To order memorial trees or send flowers to the family in memory of Jessica Drexler, please visit our flower store.