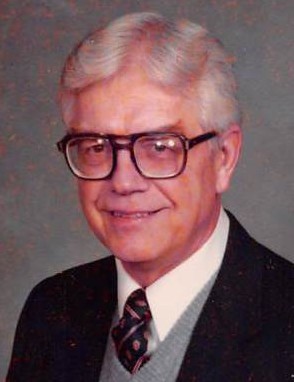 Kenneth was born on January 5, 1922 in Marshfield to George and Mayme (Schultz) Kann. In 1928, the family moved to Stratford where his father began an oil business. He went to grade school at St. Joseph’s in Stratford and graduated from Stratford High School in 1940. He then attended Wausau Business Institute and married Charlotte Bahr, a former neighbor, on May 17, 1941.

He then worked in the office at Marathon Rubber Products during WWII. He was then asked to be Co-Manager of J.M. Kuebler Co. in Wausau. The business grew from 10 employees to over 220 in 1968.

Upon leaving J.M. Kuebler, then known as Marathon Millwork in 1968, he was employed as office manager and sales representative of Green Bay Packaging until retiring on May 1, 1987. After retiring, he joined his wife Charlotte in their antique business which they both enjoyed.

For the past 5 ½ years, he has lived at Primrose Retirement Community.

He was preceded in death by his wife, Charlotte, on June 13, 2011; three brothers, George, Jerome and Robert; two sisters, Patricia and Mary Jane.

In lieu of flowers, memorials may be directed to Aspirus Hospice House or to Church of the Resurrection.

Brainard Funeral Home – Wausau Chapel is assisting the family with arrangements. Online condolences may be given at www.brainardfuneral.com

To order memorial trees or send flowers to the family in memory of Kenneth Kann, please visit our flower store.