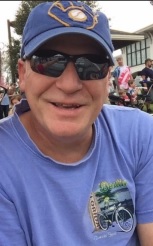 One minute they were waiting for Dad to come home from bow hunting — and the next minute they were rushing to a hospital four hours away, praying a massive heart attack could be healed. With family at his side, Mike passed into the arms of his loving Father in Heaven.

Our dad, husband, son, brother, and friend has moved to a heavenly ‘relocation’. Anyone who knows Mike ‘knows’ that he doesn’t mince words. His direct orders would be, “I love you and want you to go on with your life because we will be together again someday.”

While just 55 years old at his passing, Mike, together with wife, Tiffany, built a great life for their four children, Michael, Tara, Olivia, and Sophia. Tiffany is a nurse and Mike a cardiovascular technician — and that is how they met, working in the same Milwaukee hospital. She loved his devotion to his two children, Michael Jr., and Tara — and he was impressed with the love she showed to his kids. (Of course, Tiff’s quick wit and ability to throw comebacks to his jokes were second to none — so he decided to keep the girl!)

Mike and Tiffany bought a home on a famous West Allis street called Candy Cane Lane. In 1984, a child with cancer lived in the neighborhood. Residents lit the neighborhood with festive decorations and, along with a sports team, collected money for childhood cancer from drivers as they enjoyed the neighborhood’s decorations. The tradition continued and Mike and Tiff made sure their corner house sparkled with Christmas cheer! (FYI, Mike’s Candy Cane Lane neighbors missed him when they moved to the Wausau area because he was the go-to guy for just about anything they needed — shovels, compressor, a hand with some shoveling … Mike was there.)

While serving in the army, Mike gained a deep appreciation for America. Tiffany said seeing the Berlin Wall made him realize how fast our freedoms can be taken away. He plowed through history books and his memory was sharp for keeping all the details.

History and the appreciation for things past also transferred to his passion for cars. Tiffany says with a smile, “Yep, my competition for Mike’s attention has four wheels, is black, moves fast, and lives in Mike’s man-cave in the backyard.”

Yes, a Grand National given loving care is a beautiful thing and taking it to car shows was a family event. Mike was proud to show off his awards in his guy style, well-decorated man cave. Besides the Grand National, Mike rescued two more, what he refers to as “garage cars.” Rusty, parts missing and all, Mike saw them as they ‘once were’ and was in the process of restoring them to their original beauty.

Besides cars, Mike, like his younger brother Rick and son Michael, collected guns. He required a strict understanding of how to use them and taught his kids to respect their power. Tiff says, “Mike could see just the tip of a gun and know what it was.”

One of the greatest joys in Mike’s life was the annual hunting trip to his brother Rick’s cabin in Michigan. In the last few years, Mike hadn’t bagged a deer. Tiff asked, “How come you haven’t shot a deer in recent years?” Mike’s response was that he really likes watching them these days more than shooting them — but he thought this year he would shoot one to make sausage sticks for Tiff and the kids.

Tiff and the four kids added joy to Mike’s life in many small ways — meeting up with the older kids in Milwaukee for lunches, board games, the fire pit in the back yard, chasing each other around the yard with two mini-bikes and the John Deere tractor, sledding, car shows, and family gatherings. Even ‘spa time’ with the girls was fun for this dad! Mike’s opinion of the girls giving him cucumber eye patches and soothing facials was, “This is great!”

A new pool in the backyard was a great addition to the family fun. Putting the pool together turned into a four-letter word job! Luckily, Mike relied on the help of a neighbor and the whole family in a 20-mile radius to get it together. Once the pool was in, Mike took more enjoyment in the new deck and a can of Pabst while keeping watch on his daughters.

More than any of his ‘things’ Mike was proud of his family. Mike and son were lifelong baseball fans. He was proud that Michael is getting married, planning to be an electrician, and looking forward to Michael giving him grandchildren someday.

Tara recently graduated with honors from college and, despite battling breast cancer, landed a great job and has worked remotely throughout her treatments. Mike is so proud of his “Princess” — Mike’s nickname for his oldest girl. Mike has nicknames for all the kids. Michael is “Buddy,” Olivia is “Sunshine Honey Pickle,” and Sophia is “Tinky Toes”.

Mike did much volunteer work at their church and often took advantage of an empty church to be alone with God and pray for his daughter’s recovery. Thankfully, we can say God is answering those prayers!

*Masks and hand sanitizers will be available.

To order memorial trees or send flowers to the family in memory of Michael Haulotte, please visit our flower store.