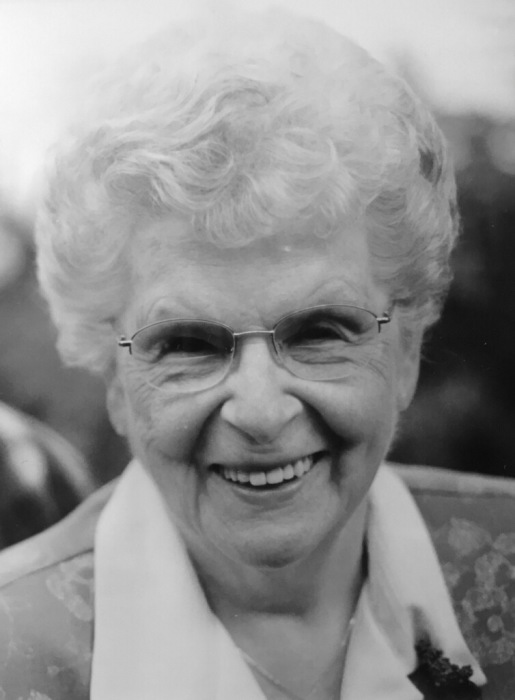 Mildred (Storm) Koenig died just weeks before her 98th birthday.  She was born at home to Walter and Selma Storm in Merrill on December 5, 1920.  After attending a rural, one room schoolhouse, she attended Marathon Vocational School.  She married Orian Koenig on June 21, 1941.  Their early years of marriage were spent in Norfolk, VA while Orian served in the Navy during World War II.

Mildred pursued her life’s highest calling, being a homemaker, with devotion, humor, and an open heart.  She felt blessed by her profession her whole life, feeling proud to support her husband and her two sons, Rick and Neil. She enjoyed being the neighborhood mom as well, especially when the driveway was full of bikes and her kitchen full of hungry boys.  Her homemaking included her excellent cooking and soup making, artistic crafts, like rug weaving, quilt making, doll collecting and embroidery.  She gave many of her rugs to family, friends, church and charities, and to Wausau’s Talent Shop.  She was an avid sports fan, the Milwaukee Braves and Brewers in particular, and the Olympics, both on TV and attending the Summer Games at the Olympics in Atlanta with her two granddaughters, Amber and Cortney.  Outside the home, Mildred served her church, Wesley United Methodist Church of Wausau, all her adult life; served as a volunteer for the Red Cross for ten years;  served as the gravy chef for years at church sponsored community Christmas dinners; and served as a volunteer to comfort shut-ins who spoke her native tongue, Low German.  Mildred's memory of family history went back generations and she passed down many stories.  She gave her grandchildren and great grandchildren unconditional love and passed on to them her sense of humor along with sewing, rug weaving, and cooking skills.

Mildred was preceded in death by her husband, Orian, after a 71 year marriage, and by her two brothers, Myron Storm and Don Storm.  She is survived by her two sons, Rick of Wausau, and Neil of Clovis, CA, their wives, Carol and Wylene; four grandchildren, Bradley Koenig of Rib Mountain, Amber (Chris) Laska of Fremont, Cortney Worrall of New York City, and Forrest (Ann) Koenig of San Anselmo, CA; and six great grandchildren, Brenna and Barrett Laska, Clara and Rose Worrall, and Gunnar and Wyatt Koenig.

Mildred’s family extends its deep appreciation to her brother in law, Daniel Reichl of Wausau, who was always eager to help, and who visited Mildred weekly 52 weeks a year, over the past several years when she resided in an assisted living home.  The family’s appreciation is also extended to her family physician, Jeffrey Oswald, MD, for years of compassionate expertise.

A Memorial Service will be held at Wesley United Methodist Church in Wausau on Saturday, December 1, 2018 at 11am.  Visitation will be from 9am until the time of service. Rev. Ethan Larson will officiate.  Burial will follow at Restlawn Memorial Park.  Gifts of remembrance will be given to the research for cures of diseases of the eye.

To order memorial trees or send flowers to the family in memory of Mildred (Storm) Koenig, please visit our flower store.