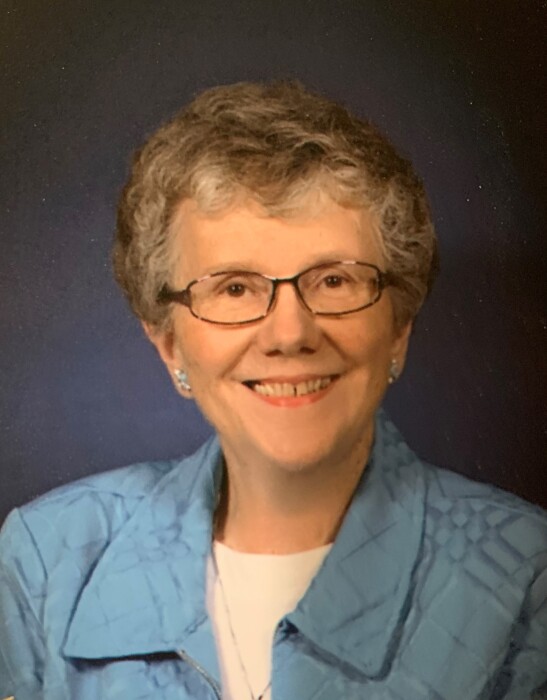 Nancy Lee (Fust) Robinson, who dedicated her time on this earth to her family, faith, and friends, and to planning her next cruise vacation, offered her last and quiet breath in the early moments of November 28, 2021.

Nancy was energy.  She was direction and organization, and, if there was a question, she had an opinion, though, what she always had was a smile.  Those that knew her as a friend say that Nancy brought a breeze of warmth when she entered a room, and that if they stayed for very long, she was going to be organizing something that they would soon be involved with. Those that didn’t know her, but had the chance opportunity to meet her, remember mostly her welcoming smile and her inviting and inclusive conversation.

Her earthly launch point was Medford, Wisconsin on June 4th, 1933. Her parents Esther (Gaetzman) and Ewald Fust came from lumbering, farming and tavern owning families. The skills that Nancy exhibited later in life as a seamstress and a magician, making food appear with no apparent effort or source, were nurtured, and blossomed with the loving guidance of her parents, who, like so many found the way to read joy between the lines of the Depression story. They lived above an icehouse, with Ewald delivering meat for the local butcher, and Esther teaching Nancy, and her sisters Kay and Barbera, to sew clothes from feed sacks sourced at the farm, while her brother Donald (later known to the world as “Brother Regis”) assisted with chores.

Upon moving to Wausau in 1939, the family lived above a warehouse on 7th street until their new home on LeMasurier Street was completed.   She attended St. Mary’s grade school in Wausau, as did all her children, and she became an expert at dodging under trains on the way to and from school. While attending Wausau High School, her Latin Club perhaps influenced her success – “Venit vidit vicit” – she came, she saw, she conquered, while harvesting all A’s (with the exception of Mr. Johnson’s B in social studies). She played cello in the school orchestra, organized the 1950 school Formal dance and was inspired with her work in the school Nursing Club to attend nursing school at St Mary’s hospital following graduation.

That trajectory was altered after her brother Donald introduced her to one of his fellow Explorer Scouts by the name of Dale Robinson, who convinced her that they should marry, have eight kids and a dog named “Skippy”, and see what the world might bring.  The world brought polio, smallpox, mumps, cancer, many broken bones and stretches of broken hearts to their doorstep, but Nancy’s strength, faith and magnetism cast each of these threats aside, like so many others, and taught her children and their children and their children’s children, what resilience looked like before it was a fad. She was a magnet, and she kept her world together, no matter what.

Over seven decades she organized and taught and made a difference in her involvement with all of the following: St Mary’s School Board; Lay Minister; Member- Circle of Joy; her rise from sales person to manger to branch and then regional manager for Sarah Coventry Jewelry; the “Information Booth Lady and Knower of All-At-The-Mall; Michael’s Candies and JanMar Candies, Volunteer extraordinaire for The Salvatorian Order Mission Warehouse (run by her sibling- Brother Regis, and serving the poor and needy of the world); the Democratic party; her Separated, Widowed & Divorced Support Group (a wonderful source of friends);  and chief inspector at the polls and strongest of supporters of democracy, as it was intended.

For, as her sister Kay, who was formerly known as Sister Mary Pierre, put it, “she truly was the best kind of ambassador.” We trust that she is now plying that tradecraft at the gates of Eternal Glory, and that, perhaps, we will witness some celestial re-organizing occurring before we know it. We miss her. We bask in the joy and warmth of family that she nurtured to her very end. And, we smile, with the legacy of the smile that she shared for the whole of her life. Peace, Mother, until we meet again.

Nancy’s sister and best friend Kay Perkowski lives in Greensboro, NC, her sister Barbara (Art) Wilke in Auburn, AL and her brother Donald (Brother Regis) is in Milwaukee. She endured with grace the loss of two sons – Tom (Amy) Robinson and Richard (Jenny) Robinson. Her children John (Mary) Robinson, Steven (Vicky) Robinson, Robert (Nancy) Robinson, Mark (Royce) Robinson, Anne (Eric) Heggelund, and Susan (Glen) Jensen miss her, though they are grateful for the loving care of the staff at Benedictine Nursing home of Wausau, and for the easing of her pain and the gentleness of her last moments.  Her grandchildren, and sources of great joy include: Sara (Travis) Meyer, Matt (Nicole) Burish, Brian (Brenda) Robinson, CJ (Malia) Robinson, Eva (David) Burgess, Michael, Elizabeth, Jacob, Ian, Andrew, Alex, Charles, Marcus Robinson, and Breanne Jensen. And, perhaps the source of her most recent storm of smiles, her great-grandchildren: Pax, Reghan, Harper, Flynn. Ivy, Bryleigh, Adalynn, Myles and Max.

In lieu of flowers, please consider a memorial to Monk Gardens , a place that Nancy enjoyed.

To order memorial trees or send flowers to the family in memory of Nancy Robinson, please visit our flower store.