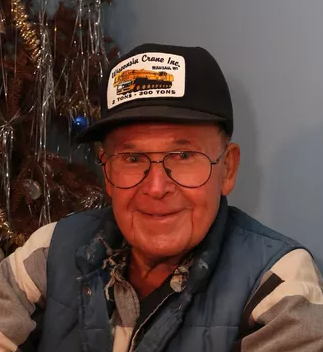 Neil Edward Olson was born May 26, 1926 and passed on November 7, 2018.  He served in the United States Army and received an Honorable Discharge.  After the military, he worked at the Northern Welding Supply for several years.  He then worked for twenty-seven years driving the City Bus.  Throughout his life, he also worked part time as a diesel mechanic.

He loved listening to sports in the garage with his boys and went deer hunting every year with his youngest son.  He also loved his dogs and working in his garden and the neighbors enjoyed the fruits of his labor.  After he retired he would snow blow the neighbors sidewalks as the men of the households were off working.  He would tease the women saying that he used to take care of the neighborhood widows.

Neil made national headlines when he was featured in an article about having his Christmas tree up since 1974 and kept it there until he could celebrate the holiday with all of his children.  The link for the article is below.

There will be no services at this time.

To order memorial trees or send flowers to the family in memory of Neil Olson, please visit our flower store.