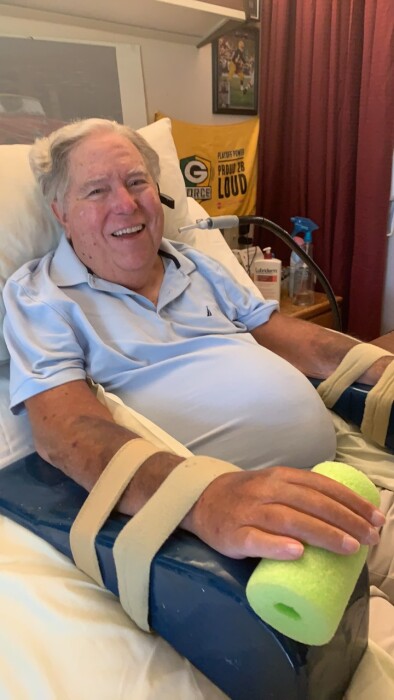 Peter John Wynhoff, 80, a lifelong Catholic and proud veteran, passed away peacefully on June 12, 2021, with his daughters by his side. He was born May 25, 1941, in Racine, WI, the son of the late Velma & Bernard Wynhoff. In 1959, Peter graduated from St. Catherine’s High School as a member of the golf team and avid caddy in the summers. After four years of service in the U.S. Army, spending two of those years living in Vicenza, Italy, Peter earned a Bachelor of Science degree from the University of Wisconsin-Madison in 1968. During his college years, Peter focused his attention on the study of Radio, TV, Film and it is while on campus and working at the Delta Zeta sorority kitchen that Peter met Susan Haupt. After two years of courtship and romance, Pete and Sue married June 29, 1968, at St. Anne’s Catholic Church in Wausau. The two were married for 47 years, until her death in 2015.

For the first two years of their marriage, Pete and Sue lived in Marshall, MN, with Pete working as an insurance adjuster for State Farm. After a diagnosis of Multiple Sclerosis, he and Sue moved to Wausau where they met lifelong friends through Wausau Newcomers, Bridge Club, Sheepshead, Bowling Leagues, the Las Vegas Six, neighborhood banter, D.C. Everest football games, and their children’s activities. Pete, Sue, and the girls spent summers and weekends up north, traveled to multiple states around the U.S., and reveled in times together. Dad had a knack creating vacation itineraries for family trips and creating beautifully organized photo albums upon return to 604 Edgar Avenue. While raising their children, Dad worked in the transportation industry. As a Director of Transportation at Haupt Contract Carriers in Schofield, CW Transport in Wisconsin Rapids, and Wausau Carriers in Schofield, Peter enjoyed his career as the Purple Dragon on the CB handle, communicating with truckers during cross country transports.

Peter continued his career until a failing body forced his retirement in 1997; he then moved to Mount View Care Center. While this was initially a difficult challenge, he adjusted, changed, and eventually came to love Mount View as his home. Peter was the friendly guy outside: talking to all and reveling in time to connect or just say hello. He spent years enjoying all Wisconsin sports, decorating his room with Packer memorabilia from ceiling to floor, listening to Brewer games, making friends with people of all ages, participating as the President of the Resident Council, swimming in the community pool, taking long drives to watch airplanes and hot air balloons at the Wausau Airport, playing in the Bell Choir, volunteering as a pen pal for children from St. Mark School, playing Sheepshead with fellow residents, watching the show (The Young & the Restless), roaring to movies in his van, listening to WIFC and Sean Hannity, dining with an array of residents from 40-100 years old, enjoying nature, his birds, and always creating that enviable tan.

Mount View staff, we thank you for all the years of devoted care. Dad cherished his relationships with you and always spoke fondly of the friends he made over the years. He realized his life literally depended on your care, attention to detail, and willing responsiveness. Your adherence to his daily routines made his life better. It was his honor to show his appreciation through sharing chocolates, truffles, non judgemental advice, support, and laughter. We are forever grateful.

Throughout his life, our dad created memorable relationships with family and friends and made people feel valued and heard. He exuded generosity, a selfless care of others, a relentless positive attitude, and attentive listening skills. He modeled a devoted and supportive love of his wife and family; he was reliable, respectful, organized, and smart. He loved his sons-in-law and adored his grandchildren. He was proud of his parents and his siblings. His lifelong fortitude resonated in his bright blue eyes. Peter had high expectations mingled with tremendously deep love. Our dad will be greatly missed, not because of all the ways he impacted the world and made us proud, but simply because he was one of our best friends. We are honored to be his daughters, Wynhoffs.

We rejoice in the fact that Dad is now running instead of rolling.

Peter was preceded in death by his parents, Bernard and Velma Wynhoff, and his wife, Susan Wynhoff. He is survived by his siblings Mary Lehman (Emery Conyers), Julianne Schultz (Daryl Tomberlin), Bill (Leslie) Wynhoff, and Joan (Bob) Hanley. His legacy is carried on by his three children, Michelle (Jeff) Lindell, Nikki Wynhoff, and Allison Wynhoff (Kristofer) Olsen; six grandchildren, Mariah, Brigitte, Ryeniah, Anika, Sora, and Kavi; one great grandchild, Nevaeh; and an extended family of relations and friends.

Visitation will be held on Thursday, June 17, 3:00-6:00 p.m. at Brainard Funeral Home, 5712 Memorial Court, Weston, WI. The Funeral Mass will be held at 10:00 a.m. on Friday, June 18, 2021, at St. Mark Catholic Church, 602 Military Road, Rothschild, WI. The Rev. Allan Slowiak will officiate. Burial with military honors will follow at Restlawn Memorial Park, Wausau. The family requests that you consider wearing brightly colored clothing to honor Peter’s zest and exuberance for life. Please share condolences with our family and view the funeral livestream here.

Memorial gifts may be made to the Multiple Sclerosis Research Fund in the Department of Neurology at UW-Madison:

To order memorial trees or send flowers to the family in memory of Peter Wynhoff, please visit our flower store.