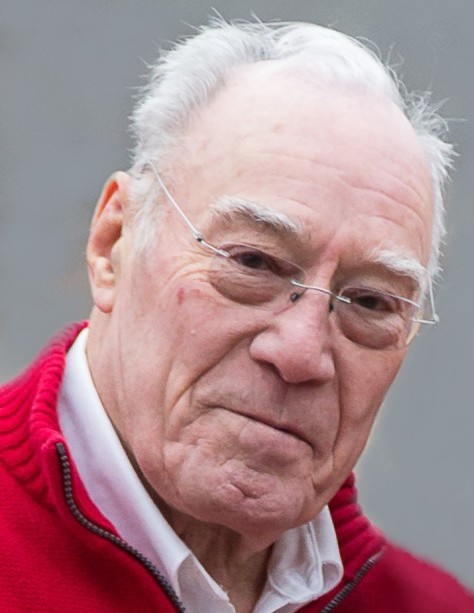 Turk grew up in “The Hollow” of Rib Mountain with his mother and four brothers. After the death of her husband in a car accident, his mother raised the five boys with the help of neighbors.  The neighborhood men were instrumental in mentoring the Flory boys to become the men they were.

Turk graduated from Wausau High School in 1950 and went on to honorably serve his country in the U.S. Army.  After returning to Wausau he went on to excel at baseball and hockey, playing in the Milwaukee Braves organization (Eau Claire, WI; Evansville, IN.; and Corpus Christi, TX).  Turk played hockey for several teams in the State along with brothers Neil, George, and Dave and they had some great teams (Chronicled in Wausau Hockey-The Wausau Vets and the Early Days).

Turk and Beth (Tapper) Flory were married on January 4, 1964 at Zion Lutheran Church, Wausau.  They moved into a house on 6th and Bridge for two years and then built a home in Weston in 1967 where they have resided since, enjoying the woods, flowers, pond and the many birds that came to the feeders.

Turk was employed by Drott Manufacturing/JI Case as a service representative in the eastern part of the Unites States and Canada.  With clients in portions of French speaking Canadian provinces he had to learn conversational French to communicate with his customers.  It was his dream job.  When Drott became JI Case, his office was transferred to Racine.  Because Joel and Jill had just lost their brother he chose not to relocate and completed the rest of his employment working in the factory.

Turk spent much of his time coaching his boys in little league, umpiring baseball games and was a hockey official.  He built an ice rink in the backyard for Jill, Joel and Clark along with the neighborhood children in the years before Clark died.  He loved helping Jill and her friend Amy understand math, removing slivers, mending scratched knees and teaching Jill how to use tools.

Turk’s retirement was spent building small furniture for his home and his children’s homes and making gifts for others.  A good deal of time was spent in his workshop building model airplanes and flying them with his friends from the Wausau RC Modelers at Sunnyvale Park, and Wednesday’s breakfast with the group.

Away from home he helped build cabinets and furniture with this longtime friend Doug Berres at the “Moreland Avenue Sawdust Factory”.  After his grandchildren were born, he enjoyed teaching them how to use tools for building small things, how to fly rubber band airplanes, how to fish, and spent much time drawing with them.  He also spent many hours watching The Nutcracker and other ballet as well as hockey games, track meets, cross-country meets and other school/church activities and performances.

Along with Beth, he spent many hours golfing at their home course, Maple Hills, in Wittenberg and traveling south in spring with friends John and Penny for golf vacations.  In summer he could be found at Rib Mountain golf course with team-members Greg, Lee, and Haas.

The family would like to thank Aspirus Comfort Care and Hospice Services for their amazing help in his last hours.  Also thanks to all the caregivers, nurses, meal and housekeeping workers at North Central Health Care/Lakeview Heights for their compassion and care shown to Turk.  Special thanks to Jim Hahn who was an almost weekly visitor lighting up Turk’s eyes when he walked in.

Memorials may be directed to the organization of your choice or the Clark Flory Ministry Fund at Mt. Calvary Lutheran Church, 503 Schmidt Ave., Rothschild, WI 54474.

Brainard Funeral Home-Everest Chapel is assisting the family with arrangements.  Online condolences may be given at www.brainardfuneral.com.

To order memorial trees or send flowers to the family in memory of R.G. "Turk" Flory, please visit our flower store.