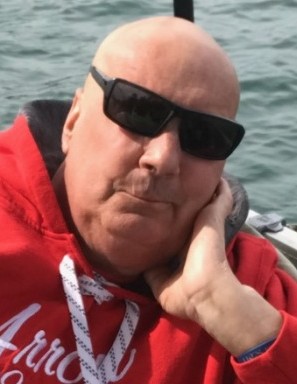 Robert W. Kayser, 58, of Weston, entered the arms of his Savior on Saturday, July 6, 2019, at his home, surrounded by his loving family, following a courageous battle with lung cancer.

He was born December 6, 1960, in Chicago, IL to Ralph and Grace (Pruett) Kayser. He married Patricia C. McConaghy on May 27, 1995 in Lake Zurich, IL. She preceded him in death on November 2, 2010. He worked for American Overhead Door Company in Wausau.

Bob was an avid reader of Stephen King novels, but also loved anything to do in the outdoors like hunting, walleye fishing, kayaking, and snowmobiling. He was known as a special kind of “fix-it” man to his family and also had a big heart to help others however he could. Bob could be found cheering on the Chicago Bears, riding his Harley Davidson motorcycle, enjoying a Friday fish fry and Old Fashions, or playing his luck on rip tickets and pull tabs at local bars. He was always listening to music whether hard rock and roll, country, or Bob's favorite, Frank Sinatra. Together with Sheri, he loved to travel to different wineries and sample the varieties of wines. He will be remembered by his family and friends for his social personality, terrific sense of humor, but most of all his ability to love unconditionally.

He is survived by his daughter, Callie (Zach Wiegel) Kayser of Weston; mother, Grace Kayser (Ralph Werfel) of Huntley, IL; sister, Patricia (Michael) Rojek and their children, Erich and Evan, of Lake Zurich, IL; and his fiancé, Sheri Fontana and her children, Ralph, Holly, and Allie (Lucas Mathson), of Weston. He was preceded in death by his wife, Patricia; his father, Ralph; grandparents from both sides of his family; and by his Best Bud, Eric Rowney.

Funeral service will be held at 11:00 a.m. on Thursday, July 11, 2019, at Mount Olive Lutheran Church, 6205 Alderson Street, Schofield, WI 54476. Rev. Raymond Connor will officiate. Visitation will be held from 4:00 – 8:00 p.m. on Wednesday, July 10, at Brainard Funeral Home – Everest Chapel, 5712 Memorial Court, Weston, WI 54476 and again from 10:00 a.m. on Thursday until the time of service at the church. Interment will be held at Gate of Heaven Cemetery in Kronenwetter. A Celebration of life will take place at Arrow Sports Club, 6202 Schofield Ave, Weston following the interment.

To order memorial trees or send flowers to the family in memory of Robert Kayser, please visit our flower store.