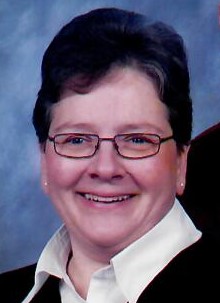 The Lord called the soul of Therese (Terri) Markstrum home at the young age of 67 in Rothschild, WI, on October 7, 2019.

Terri was born in Wausau on November 3, 1951 to the late John and Genevieve (Gorecki) Green. She graduated from Newman Catholic High School in 1969; it was there that she met her best friend and soul mate, Tim Markstrum. They fell in love during their time in Milwaukee where Terri was earning a bachelor’s degree in special education from UW Milwaukee. After graduation, she earned management roles at McDonald’s restaurants, being one of the first women to hold such a role. She retired after 37 years in the banking industry, having spent those years as a Human Resources manager for First American, M&I, and BMO Harris Banks. Terri and Tim were married on October 8, 1977 at St. Therese Catholic Church, Rothscihld.

Faith held an incredibly important role in Terri’s life. Having been named after the St. Therese Catholic Church in Rothschild, she found her calling to take care of the church and the parishioners. She spent much of her life at St. Therese, devoting her talents and leadership skills to every facet of the church. Her favorite memories included trips she would take with Tim and Father Janusz to Europe, The Holy Land, Peru, and especially The Vatican. It was there where she was able to read during mass; a memory she treasured forever.

Outside of her church life, Terri was a caring individual who could make everyone feel comfortable. She was the light in the life of those who knew her. She could be outgoing and sassy, but also share her compassion and love to a stranger. She was an excellent cook, enjoyed to bake, and loved Friday night fish fry. She cherished watching sunsets with her family on pontoon rides at the cottage in Tomahawk. She held a special place in her heart for each of her nieces and nephews – they were her everything. Terri’s selfless and giving spirit leaves a legacy beyond her death, being a donor to help save the lives of others.

A Mass of Christian Burial will be held at 12:00 noon on Friday, October 11, 2019 at St. Therese Catholic Church, 113 W Kort Street, Rothschild. The Rev. Joseph Albert and The Rev. Rev. Janusz Kowalski will officiate. Interment will be at Gate of Heaven Cemetery, Kronenwetter. Visitation will be held from 9:30 a.m. until the time of mass at the church.

To order memorial trees or send flowers to the family in memory of Therese "Terri" Markstrum, please visit our flower store.