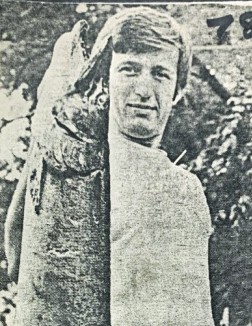 Virgil “Virg” Beck, 66, of Stevens Point, passed away on July 23rd, while at Marshfield Medical Center after battling cancer for several years.

Virgil was born on August 21, 1954, to the late Delos and Myrtle (Traska) Beck, the oldest of their two sons.

Virg attended the University of Wisconsin and held both his BA of Fine Arts and Natural Resources. After graduating from the University, Walt Disney Productions hired him to assist in the design of the EPCOT Center in Florida. After leaving his work for Walt Disney, Virg went out and did freelance work full-time. His painting “Wisconsin Muskellunge,” is the official painting of the State Fish and hangs in the State Capitol in Madison. His No. 1 print of the “Mepps 50th Anniversary Rainbow Trout” and a Beck original English Springer Spaniel hung in the White House during George H. W. Bush’s presidency. Virg had more than 60 outdoor publication covers to his credit. He won the 2008 and 2012 Wisconsin Inland Trout Stamp, the 1999/2000 Wisconsin Inland Trout Stamp, the 2002 Wisconsin Great Lakes Trout and Salmon Stamp, the 1996 Wisconsin Great Lakes Trout, and Salmon Stamp, the 1991 Delaware Trout Stamp, and the 1987 Wisconsin Wild Turkey Stamp contests. He also painted 13 stamps for the National Wildlife Federation in Washington, D.C, he painted the cover for the International Game Fish Association’s “World Record Game Fishes” book in 1987 and was the American Fisheries Society’s “Artist of the Year” in 1990. Virg had a passion for realism in his art and often created paintings for family and friends that have been treasured throughout the years. While art was his passion, Virgil also had a love for conservation, donating paintings to help raise money for organizations such as Trout Unlimited and Ducks Unlimited. While Virgil’s family and his friends are saddened by their loss, they take comfort in knowing that his artwork will stand the test of time; keeping his memory alive in the hearts of all who knew and loved him.

Virgil is survived by his brother Ed (Judy) Beck of Norfolk, MA, as well as several cousins, a niece, and two nephews.

A visitation will take place from 12:00 Noon until 2:00 PM on Monday, August 2, 2021, at the Helke Chapel, 302 Spruce Street, Wausau. Burial will follow at Restlawn Memorial Park. Family and friends are asked to go to www.brainardfuneral.com to leave words of remembrance.

In lieu of flowers, memorials may be directed to the family.

To order memorial trees or send flowers to the family in memory of Virgil Beck, please visit our flower store.