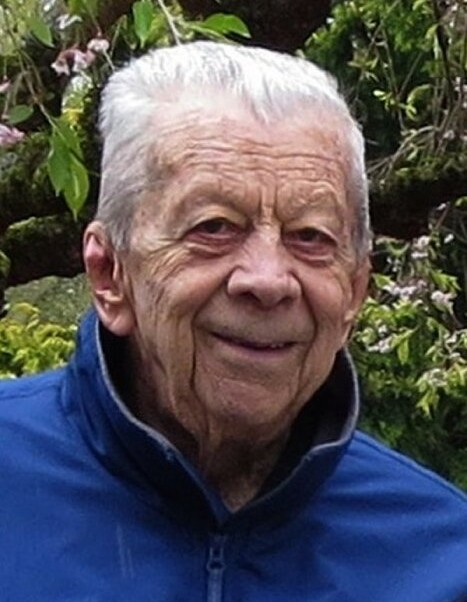 William C. Seiser (94) was born July 8, 1927, in Milwaukee, WI, and passed peacefully on January 8, 2022, at the Aspirus Hospice House in Wausau, Wisconsin. He was the son of Frieda Salina Walker Schlueter and William Arthur Weihing Seiser.

Bill grew up in Milwaukee and later attended North Central College in Naperville, IL receiving a BA in math. He then attended the University of Nebraska-Lincoln and received a Master’s Degree in Education. He was married to Virginia Grace Noerenberg on August 13, 1948, at Zion Evangelical Church in Ithaca, Nebraska.

Bill was a high school math teacher and education administrator. Bill served as Assistant Supervisor of Math and Science for the Milwaukee Public Schools, and was then hired as Coordinator of Mathematics to implement ‘Modern Math’, an innovative curriculum revision after the Russians launched “Sputnik” into space. In the late sixties and seventies, Bill became the Director of Facilities Planning and Administrative Research, in which he oversaw the needs for 132,000 students in 165 schools and became heavily invested in Milwaukee’s desegregation plan.

Bill and Grace were active members of Albright United Methodist Church in Milwaukee. Upon retirement, they moved to Wausau and joined the First UM Church.  They lived at Forest Park Village, a Homme Home, for thirty one years until their respective deaths.

Bill and Grace did volunteer work for the United Methodist Church in Alaska, Grenada, Costa Rica, Nashville, St Croix Virgin Islands, Kentucky, and New York City. They also attended many Elder Hostels, extending their love for learning. During his retirement years, he actively assisted his children with home renovations, and he took great joy in making furnished dollhouses for all of his granddaughters and for his very good friend, Cynthia .

Music has always been a foundational cornerstone and passion for Bill. He played trumpet in High School, college and for some years, professionally. He was the church choir director and the scoutmaster song leader in his earlier days. He sang in church choirs and was often a featured tenor soloist at Albright UM Church.  Listening to Classical, Gospel, and Big Band music has always been one of his greatest joys. Bill was also very active in scouting and began a tradition of becoming an Eagle Scout, which has now continued for two more generations.

Bill found independent living at Forest Park Village a wonderful decision after retirement, and he credited the staff and its director for making it such an excellent place to develop friendships and caring relationships.

To order memorial trees or send flowers to the family in memory of William Seiser, please visit our flower store.